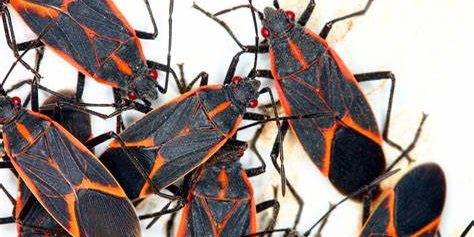 Boxelder bugs get their name from being found on Boxelder trees. However, they can also be found on maple and ash trees. This means that they could easily be discovered in a lot of different locations in Weiser that might have trees. They could live in places like Memorial Park or Weiser City Park. Or, if your property has boxelder, maple, or ash trees, then they could reside in your own backyard! Get Lost Pest Control is your local Weiser pest control company that can assist you with your boxelder bug infestation.

Boxelder bugs are not dangerous to humans, and will only try to bite or attack if they feel they are being threatened. Even though they are not dangerous, they are still considered a nuisance pest and can eat a lot of your plant material.

You can try to prevent boxelder bugs on your own by spraying undiluted white vinegar around your home, in places where you think they might show up. If you live in a warm location where the sun is hitting the house, you might want to double up with your spraying. It is important to know that other kinds of vinegar will not work and also leave stains. Though the vinegar method may work, it is likely not a permanent prevention solution, and pest problems are best solved by professionals.

To treat for boxelder bugs in your yard, you can try to blast them with your garden hose to kill them and break up their colony. You can also try to vacuum them up if they make their way into your home. However, those methods are only temporary and won’t make the problem go away for good. The Weiser technician professionals at Get Lost Pest Control have the right product and tools you need to safely eradicate you Boxelder bug infestation. Give us a call now for your free service bid!