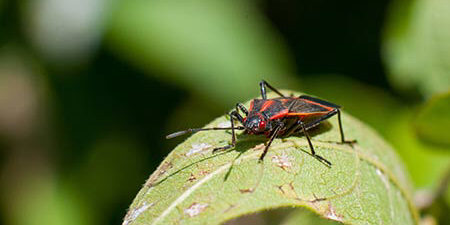 Boxelder bugs are a common nuisance insect in Weiser. These bugs are commonly seen in the spring, summer, and fall. They are known for congregating on homes, looking for warmth. Boxelder bugs can be seen on trees throughout Weiser, including areas like Memorial Park and Veteran’s Park.

Boxelder bug infestations can quickly get out of hand without professional help. Get Lost Pest Control is your Weiser boxelder bug exterminator!

Characteristics: Boxelder bugs get their name from the fact that they are often found on or near boxelder trees. They are easily identifiable by their black coloring with red markings on their backs. They are about 1/2 of an inch in length when they are full grown. Boxelder bug nymphs are usually bright red. In the fall, they will start congregating on the outside of buildings, particularly looking for areas where the sun is shining. As it comes closer to the cold winter months, they will attempt to move back inside to avoid the harsh weather.

Prevention: The best time to take care of boxelder bugs is in the summer or fall, when they are out of their hiding places in wall voids. It is not wise to attempt to kill them while still inside the wall voids. Doing so can attract other types of beetles that will want to feed on the dead boxelder bugs bodies. During the spring, summer, and fall, make sure to inspect your home and seal any cracks or crevices that the bugs might use to enter your home.

To get help with your Weiser Boxelder Bug Extermination, contact Get Lost Pest Control. They will apply an insecticide spray inside and outside your house, that will keep your home protected for up to three months!